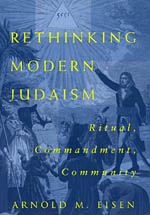 Arnold Eisen here calls for a fundamental rethinking of the story of modern Judaism. More than simply a study of Jewish thought on customs and rituals, Rethinking Modern Judaism explores the central role that practice plays in Judaism's encounter with modernity.

"Fascinating . . . an insightful entrance point to understanding the evolution of the theologies of America's largest Jewish denominations."—Tikkun

"I know of no other treatment of these issues that matches Eisen's talents for synthesizing a wide variety of historical, philosophical, and social scientific sources, and bringing them to bear in a balanced and open-minded way on the delicate questions of why modern Jews relate as they do to the practices of Judaism."—Joseph Reimer, Boston Book Review

"At once an incisive survey of modern Jewish thought and an inquiry into how Jews actually live their religious lives, Mr. Eisen's book is an invaluable addition to the study of American Judaism."—Elliott Abrams, Washington Times
TABLE OF CONTENTS