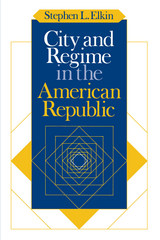 Stephen L. Elkin deftly combines the empirical and normative strands of political science to make a powerfully original statement about what cities are, can, and should be. Rejecting the idea that two goals of city politics—equality and efficiency—are opposed to one another, Elkin argues that a commercial republic could achieve both. He then takes the unusual step of addressing how the political institutions of the city can help to form the kind of citizenry such a republic needs.

The present workings of American urban political institutions are, Elkin maintains, characterized by a close relationship between politicians and businessmen, a relationship that promotes neither political equality nor effective social problem-solving. Elkin pays particular attention to the issue of land-use in his analysis of these failures of popular control in traditional city politics. Urban political institutions, however, are not just instruments for the dispensing of valued outcomes or devices for social problem-solving—they help to form the citizenry. Our present institutions largely define citizens as interest group adversaries and do little to encourage them to focus on the commercial public interest of the city. Elkin concludes by proposing new institutional arrangements that would be better able to harness the self-interested behavior of individuals for the common good of a commercial republic.
AUTHOR BIOGRAPHY
Stephen L. Elkin teaches political science at the University of Maryland, College Park. He is the author of Politics and Land Use Planning and the coeditor of The Democratic State.
TABLE OF CONTENTS