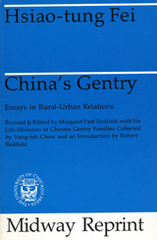 China's Gentry: Essays on Rural-Urban Relations
by Hsiao-tung Fei
edited by Margaret Park Redfield
University of Chicago Press, 1980
Paper: 978-0-226-23957-6
These seven essays on the structure of Chinese society are based on articles contributed by Fei to Chinese newspapers in 1947 and 1948. Six case histories from a study of the gentry by Yung-teh Chow are appended.

"The chief interest and charm of this book lie in the fact that it is not directed to the Western reader; these were studies written in Chinese, by an erudite Chinese, for a Chinese public. . . . Mrs. Redfield is to be complimented for her own careful research in preparing this translation for a non-Chinese public."—Robert F. Spencer, American Anthropologist
TABLE OF CONTENTS