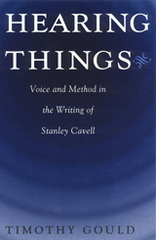 What does philosophy have to do with the human voice? Has contemporary philosophy banished the "voice" from the field of legitimate investigation? Timothy Gould examines these questions through the philosopher most responsible for formulating them, Stanley Cavell. Hearing Things is the first work to treat systematically the relation between Cavell's pervasive authorial voice and his equally powerful, though less discernible, impulse to produce a set of usable philosophical methods.

Gould argues that a tension between voice and method unites Cavell's broad and often perplexing range of interests. From Wittgenstein to Thoreau, from Shakespeare to the movies, and from opera to Freud, Gould reveals the connection between the voice within Cavell's writing and the voices Cavell appeals to through the methods of ordinary language philosophy. Within Cavell's extraordinary productivity lies a new sense of philosophical method based on elements of the act of reading. Hearing Things is both an important study of Cavell's work and a major contribution to the construction of American philosophy.


Preface and Acknowledgments
1: A Prelude to the Study of Voice and Method
2: Voices
3: Criteria and Crisis
4: The Model of Reading
5: Reading and Its Reversals
App: Stanley Cavell: A Brief Account
Notes
Principal Works of Stanley Cavell
Selected Bibliography
Index