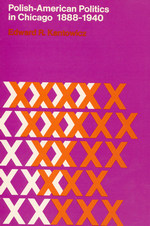 The "new immigrants" who came from southern and eastern Europe at the turn of the century have rarely been the subject of detailed scholarly examination. In particular, Poles and other Slavic groups have usually been written about in a filiopietist manner. Edward Kantowicz fills this gap with his incisive work on Poles in Chicago.

Kantowicz examines such questions as why Chicago, with the largest Polish population of any city outside of Poland, has never elected a Polish mayor. The author also examines the origins of the heavily Democratic allegiance of Polish voters. Kantowicz demonstrates that Chicago Poles were voting Democratic long before Al Smith, Franklin Roosevelt, or the New Deal.

Kantowicz has made extensive use of registration lists and voting records to construct a statistical picture of Polish-American voting behavior in Chicago. He draws on church records and census records to provide a detailed description of Chicago's many Polish neighborhoods. He also has studied the city's Polish-language press as well as the few manuscript collections left by Polish-American politicians. These collections, together with data gleaned from interviews with individuals who were acquainted with these figures, are used to sketch profiles of the political leaders of Polonia's capital.

Kantowicz focuses on the goals which the Polish-American community pursued in politics, the issues they deemed important, and the functions which politics served for them. He links this analysis to observations on the homeland and the reasons for which the Poles emigrated. In this context he is able to draw conclusions about the nature of the ethnic politics in general. His work will appeal to a variety of readers: urban and twentieth-century historians, political scientists, and sociologists.
AUTHOR BIOGRAPHY
Edward R. Kantowicz is assistant professor of history at Carleton University in Ottawa, Canada.
TABLE OF CONTENTS


List of Maps and Tables
Preface
I. From Poland to Chicago
1. Polska and Polonia
2. Polonia's Capital
3. Influences and Institutions
4. Politics in Polonia
II. Chicago Politics in the Progressive Era
5. The Emergence of the Polish-Democratic Bloc
6. The Banker and the Boss
7. The WASP a Ethnic Leader
8. Polonia and Progressivism
III. National Politics, 1888-1940
9. "Roofs of Silver, Fences of Polish Sausage"
10. The Politics of Wartime
11. Ethnic and Economic Heroes
IV. The Rise of the Chicago Democratic Machine
12. Big Bill the Boisterous
13. The End of the Republican Alternative
V. Polish-American Power: Hopes and Realities
14. A Changing Polonia
15. The Drive for Recognition
16. Organizing the Recognition Drive
17. The Finest Fruit of Recognition: Edmund K. Jarecki
18. Limitations of the Recognition Drive
Postscript
A Note on Sources and Method
Notes
Index