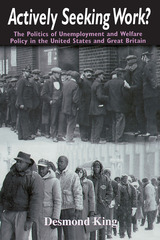 Why have both Great Britain and the United States been unable to create effective training and work programs for the unemployed? Desmond King contends that the answer lies in the liberal political origins of these programs. Integrating extensive, previously untapped archival and documentary materials with an analysis of the sources of political support for work-welfare programs, King shows that policymakers in both Great Britain and the United States have tried to achieve conflicting goals through these programs.

The goal of work-welfare policy in both countries has been to provide financial aid, training, and placement services for the unemployed. In order to muster support for these programs, however, work-welfare programs had to incorporate liberal requirements that they not interfere with private market forces, and that they prevent the "undeserving" from obtaining benefits. For King, the attempt to integrate these incompatible functions is the defining feature of British and American policies as well as the cause of their failure.
TABLE OF CONTENTS