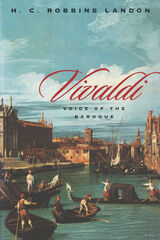 Vivaldi: Voice of the Baroque
by H. C. Robbins Landon
University of Chicago Press, 1996
Paper: 978-0-226-46842-6
Vivaldi boasted that he could compose a concerto faster than a scribe could copy one. Despite his prolificacy, The Four Seasons, and the majority of his already published work had fallen into obscurity by the time of his death in poverty in 1741. Most of his music-concertos, sonatas, operas, and sacral music-has been published only recently.

Very little has been written on Vivaldi for the nonspecialist, especially in English. Landon rediscovers the composer in this accessible and musically informed biography while presenting documentation of the musician's life discovered after the Baroque revival in the 1930s. This book includes illustrations of eighteenth-century Venice and several newly translated letters, thoroughly evoking the style of the time and revealing some of the more personal aspects of Vivaldi's life.

"Belongs on the shelf of every serious music student."—Kirkus

"Gives a good feel for Vivaldi's life and times . . . and describes particularly well how Vivaldi has been revived."—Booklist