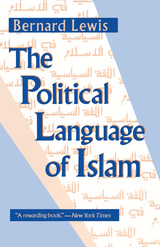 What does jihad really mean? What is the Muslim conception of law? What is Islam's stance toward unbelievers? Probing literary and historical sources, Bernard Lewis traces the development of Islamic political language from the time of the Prophet to the present. His analysis of documents written in Arabic, Persian, and Turkish illuminates differences between Muslim political thinking and Western political theory, and clarifies the perception, discussion, and practices of politics in the Islamic world.

"Lewis's own style, combining erudition with a simple elegance and subtle humor, continues to inspire. In an era of specialization and narrowing academic vision, he stands alone as one who deserves, without qualification, the title of historian of Islam."—Martin Kramer, Middle East Review

"A superb effort at synthesis that presents all the relevant facts of Middle Eastern history in an eminently lucid form. . . . It is a book that should prove both rewarding and congenial to the Muslim reader."—S. Parvez Manzor, Muslim World Book Review

"By bringing his thoughts together in this clear, concise and readable account, [Lewis] has placed in his debt scholars and all who seek to understand the Muslim world."—Ann K. S. Lambton, Bulletin of the School of Oriental and African Studies

"[Lewis] constructs a fascinating account of the ways in which Muslims have conceived of the relations between ruler and ruled, rights and duties, legitimacy and illegitimacy, obedience and rebellion, justice and oppression. And he shows how changes in political attitudes and concepts can be traced through changes in the political vocabulary."—Shaul Bakhash, New York Review of Books
TABLE OF CONTENTS


Preface
Note on Transcription
1. Metaphor and Allusion
2. The Body Politic
3. The Rulers and the Ruled
4. War and Peace
5. The Limits of Obedience
Notes
Index