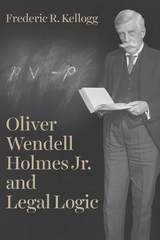 With Oliver Wendell Holmes, Jr. and Legal Logic, Frederic R. Kellogg examines the early diaries, reading, and writings of Justice Oliver Wendell Holmes, Jr. (1841–1935) to assess his contribution to both legal logic and general logical theory. Through discussions with his mentor Chauncey Wright and others, Holmes derived his theory from Francis Bacon’s empiricism, influenced by recent English debates over logic and scientific method, and Holmes’s critical response to John Stuart Mill’s 1843 A System of Logic.

Conventional legal logic tends to focus on the role of judges in deciding cases. Holmes recognized input from outside the law—the importance of the social dimension of legal and logical induction: how opposing views of “many minds” may converge. Drawing on analogies from the natural sciences, Holmes came to understand law as an extended process of inquiry into recurring problems.

Rather than vagueness or contradiction in the meaning or application of rules, Holmes focused on the relation of novel or unanticipated facts to an underlying and emergent social problem. Where the meaning and extension of legal terms are disputed by opposing views and practices, it is not strictly a legal uncertainty, and it is a mistake to expect that judges alone can immediately resolve the larger issue.
AUTHOR BIOGRAPHY
Frederic R. Kellogg was a Fulbright Fellow in Warsaw, Poland and Recife, Brazil, and is visiting professor at the Federal University of Pernambuco in Recife. He served as an Assistant U.S. Attorney and Advisor to Attorney General Elliot Richardson, before resigning with the Attorney General in the 1973 Saturday Night Massacre.
TABLE OF CONTENTS