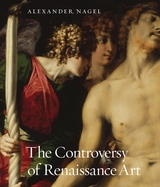 Many studies have shown that images—their presence in the daily lives of the faithful, the means used to control them, and their adaptation to secular uses—were at the heart of the Reformation crisis in northern Europe.  But the question as it affects the art of Italy has been raised only in highly specialized studies.

In this book, Alexander Nagel provides the first truly synthetic study of the controversies over religious images that pervaded Italian life both before and parallel to the Reformation north of the Alps. Tracing the intertwined relationship of artistic innovation and archaism, as well as the new pressures placed on the artistic media in the midst of key developments in religious iconography, The Controversy of Renaissance Art offers an important and original history of humanist thought and artistic experimentation from one of our most acclaimed historians of art.

Alexander Nagel is professor of Renaissance art history at the Institute of Fine Arts at New York University. He is the author of Michelangelo and the Reform of Art and coauthor, with Christopher Wood, of Anachronic Renaissance.

“Nagel works here to recast people’s idea of the Renaissance. . . . This volume is elegantly and intelligently illustrated, with numerous figures in color. Meant to be provocative, it is admirable in its range and ambitions—a vade mecum for charting new approaches to Renaissance art. Highly recommended.”

“Nagel provides an insightful reading of Italian art produced between 1490 and 1540 during an era of religious controversy concurrent with the Reformation in northern Europe and preceding the Counter-Reformation in Italy.”

“One may not always agree with Nagel’s suggestions, but one cannot deny that his beautifully produced book is full of thought-provoking views that will stimulate its readers to rethink their ideas about Reformation questions in Italian Renaissance art.”
— Renaissance Quarterly

“Beautifully produced and thought-provoking in its rewriting of early sixteenth-century Italian art history, The Controversy of Renaissance Art is, like the art it discusses, productively iconoclastic, setting the stage for a revitalized discussion of one of art history’s most deeply studied periods.”
— CAA reviews


List of Figures
Preface
Introduction
A nontriumphant Renaissance • The Reformation that never happened in Italy • Pre- and post-Trent • Range of the study
Part 1 Excavations in Christian Art
1 Effects of Estrangement
“These are your idols, which you have put in my temple” • Theater and its double • Art historians and their precursors • The time of the other • Attending effigies • Interior cult and exterior cult • Whores and idols
2 Erasure, Defacement, Unmasking
Reform as art restoration • Defamiliarized icons • The “puppet painter” gets a hearing • Erasmus unmasks the saints
3 Excavations of the Image
A picture of indeterminate subject and uncertain finish • Threshold painting • Figures in a loose and unready state • Images from the underside • Drawing brought to the surface • Reconfigurations • Christian art that is no longer • Related experiments
4 Re-mediations of the Altarpiece
The painter’s new profession • Raphael extracts the icon • Vision as re-mediation • Structures of archaism • Christocentrism • Transmutation chamber
Part 2 Christ as Idol
5 Animated Statues
Sculpture and the pictorial imaginary • The idol in Saint Augustine’s study • Statue + column = idolatry • In the round and from behind • Showdown in the arena of painting • Ficino’s ambivalent defense of image magic • The crucifix as anti-statue
6 The Antique Statue of Christ
“Christ, who deserved a statue, received instead a cross” • A statue of Christ from the Holy Land • Replication and retroactivation • An antique Christ at the Minerva • Rhetorical interferences • Form as symbol
7 Avatars of the Golden Calf in the Works of Andrea Riccio
Gregorio Cortese commissions art at Santa Giustina, 1513 • Moses and polytheism • A Moses-idol • Repetition compulsion • Christ as idol • The work of conversion • Uncompromising logic • Fire takes the form of bronze • Recursions • Religion on earth

Part 3 Soft Iconoclasm
8 Architecture as Image
Forms of iconophobia in Italy • A semiotic contest • Replacement and reversion • Early interventions at Florence and Siena • Figuration and fulfillment, and vice versa • “All the other things are shadows”
9 The Tabernacle in the Matrix
“So long as it is not about saints” • Raimondi’s I Modi in Giberti’s Rome • Pornography as iconoclasm • Nonprocreative art • A new model of church art at Verona cathedral • The Virgin becomes architecture • Borromeo interprets Giberti
10 The Most Abstract Altarpiece of the Italian Renaissance
The Vicenza altar and reform circles in northern Italy • Adventures in aniconism • The virtues of stones • The world is an animal • Displacement