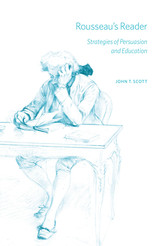 On his famous walk to Vincennes to visit the imprisoned Diderot, Rousseau had what he called an “illumination”—the realization that man was naturally good but becomes corrupted by the influence of society—a fundamental change in Rousseau’s perspective that would animate all of his subsequent works. At that moment, Rousseau “saw” something he had hitherto not seen, and he made it his mission to help his readers share that vision through an array of rhetorical and literary techniques.

In Rousseau’s Reader, John T. Scott looks at the different strategies Rousseau used to engage and persuade the readers of his major philosophical works, including the Social Contract, Discourse on Inequality, and Emile. Considering choice of genre; textual structure; frontispieces and illustrations; shifting authorial and narrative voice; addresses to readers that alternately invite and challenge; apostrophe, metaphor, and other literary devices; and, of course, paradox, Scott explores how the form of Rousseau’s writing relates to the content of his thought and vice versa. Through this skillful interplay of form and content, Rousseau engages in a profoundly transformative dialogue with his readers.

While most political philosophers have focused, understandably, on Rousseau’s ideas, Scott shows convincingly that the way he conveyed them is also of vital importance, especially given Rousseau’s enduring interest in education. Giving readers the key to Rousseau’s style, Scott offers fresh and original insights into the relationship between the substance of his thought and his literary and rhetorical techniques, which enhance our understanding of Rousseau’s project and the audiences he intended to reach.
AUTHOR BIOGRAPHY
John T. Scott is professor of political science at the University of California, Davis. He has edited or translated several volumes on Rousseau, including The Major Political Writings of Jean-Jacques Rousseau, also published by the University of Chicago Press.

REVIEWS
“Rousseau’s Reader takes a productively fresh look at the major works that comprise Rousseau’s system and has important new things to say that are sure to impact virtually every major scholarly dispute.”
— Christopher J. Kelly, coeditor of The Rousseauian Mind

“A remarkable book. Many have examined Rousseau’s literary style and rhetoric, as well as his efforts at what Rousseau himself is prone to call ‘persuasion,’ but Scott goes well beyond, focusing on the interaction between author and reader, and, specifically, the techniques Rousseau uses to educate his reader. Scott does all readers of Rousseau a great service in showing exactly how the arguments and what might be called the ‘literary action’ of Rousseau’s writings work together towards a common goal."
— Ryan Patrick Hanley, Boston College

"Rousseau’s Reader may have been written primarily with a professional audience in mind, yet its relevance to the political world in the year of its publication could not have escaped its author. John T. Scott is to be thanked for this in-depth study, which can be read with profit by the lay reader as well as to the professional philosopher."
— The Review of Metaphysics