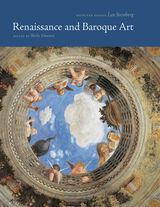 Leo Steinberg was one of the most original art historians of the twentieth century, known for taking interpretive risks that challenged the profession by overturning reigning orthodoxies. In essays and lectures ranging from old masters to contemporary art, he combined scholarly erudition with an eloquent prose that illuminated his subject and a credo that privileged the visual evidence of the image over the literature written about it. His writings, sometimes provocative and controversial, remain vital and influential reading. Steinberg’s perceptions evolved from long, hard looking at his objects of study. Almost everything he wrote included passages of formal analysis, but always put into the service of interpretation.

This volume begins and ends with thematic essays on two fundamental precepts of Steinberg’s art history: how dependence on textual authority mutes the visual truths of images and why artists routinely copy or adapt earlier artworks. In between are fourteen chapters on masterpieces of renaissance and baroque art, with bold and enlightening interpretations of works by Mantegna, Filippo Lippi, Pontormo, El Greco, Caravaggio, Steen and, finally, Velázquez. Four chapters are devoted to some of Velázquez’s best-known paintings, ending with the famously enigmatic Las Meninas.

Renaissance and Baroque Art is the third volume in a series that presents Steinberg’s writings, selected and edited by his longtime associate Sheila Schwartz.
AUTHOR BIOGRAPHY
Leo Steinberg (1920–2011) was born in Moscow and raised in Berlin and London, emigrating with his family to New York in 1945. He was a professor of art history at Hunter College, City University of New York, and then Benjamin Franklin Professor at the University of Pennsylvania, where he remained until his retirement in 1990. Sheila Schwartz worked with Steinberg from 1968 until his death in 2011. She received her PhD from the Institute of Fine Arts, New York University, and is presently research & archives director of The Saul Steinberg Foundation.

REVIEWS
"Renaissance and Baroque Art includes essays on keystone paintings like Diego Velázquez’s ‘Las Meninas’, as well as works by artists such as El Greco, Caravaggio and Mantegna. Because Steinberg’s prose style is almost conversational — lively, literate and accessible — and his insights rarely less than revelatory, there’s plenty here for the general reader."
— Eric Gibson, Spectator

1. Words That Prevent Perception
2. Mantegna: Did He Paint by the Book?
3. “How Shall This Be?” Reflections on Filippo Lippi’s Annunciation in London
4. Mantegna’s Dead Christ: Passion and Pattern
5. Pontormo’s Capponi Chapel
6. Pontormo’s Alessandro de’ Medici; or, I Only Have Eyes for You
7. Salviati’s Beheading of St. John the Baptist
8. An El Greco Entombment Eyed Awry
9. Observations in the Cerasi Chapel
10. Guercino’s Saint Petronilla
11. Steen’s Female Gaze and Other Ironies
12. Deciphering Velázquez’s Old Woman
13. The Water Carrier of Velázquez
14. Velázquez’s Pablo de Valladolid
15. Velázquez’s Las Meninas
16. The Glorious Company