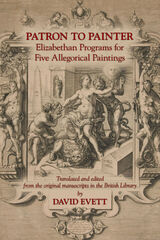 Patron to Painter: Elizabethan Programs for Five Allegorical Paintings
edited by David Evett
Arizona Center for Medieval and Renaissance Studies, 2020
Paper: 978-0-86698-490-4
For more than two centuries the group of early modern English manuscripts presented in this volume sat mostly ignored on the shelves of the British Library, known only to the librarians who catalogued them. Six of them, for four different elaborate allegorical paintings, appear in the manuscript catalog of the Sloane Collection as “Instructions to painters.” A seventh, from the Harley collection in the same library, has more recently been added to the group. On art historical, iconographic, and historical grounds the manuscripts add significantly to our knowledge of Elizabethan visual allegory, and reveal a provocative new contribution to the evolution of English political thought. And the development across three of the programs of a warm personal relationship between the patron and the artist opens a unique window into early modern relationships of this kind. Unlike most other surviving artistic programs, this one reveals its author’s personality and interests in a rich and beguiling way, and although as a writer he is no Sidney or Nashe, the naïve yet widely informed enthusiasm with which he addresses his readers has considerable force and charm.
AUTHOR BIOGRAPHY
David Evett (1936–2011) was Professor Emeritus of English at Cleveland State University. He published articles in major journals on Spenser, Donne, Shakespeare, Marvell, and other subjects. His first book, Literature and the Visual Arts in Tudor England (1990) won the British Council Prize in the Humanities in 1991. His second, Discourses of Service in Shakespeare’s England, appeared in 2005. In addition, he investigated early modern social history, religious aspects of literature, theatrical performance of Shakespeare and other dramatists, and the connections among literature, biology, and anthropology. He was a published poet and an experienced amateur actor and director. From 2004–2008 he was dramaturge for the Actors Shakespeare Project, a Boston company.
TABLE OF CONTENTS