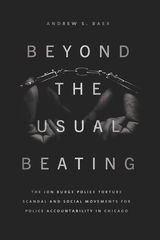 The malign and long-lasting influence of Chicago police commander Jon Burge cannot be overestimated, particularly as fresh examples of local and national criminal-justice abuse continue to surface with dismaying frequency. Burge’s decades-long tenure on the Chicago police force was marked by racist and barbaric interrogation methods, including psychological torture, burnings, and mock executions—techniques that went far “beyond the usual beating.” After being exposed in 1989, he became a symbol of police brutality and the unequal treatment of nonwhite people, and the persistent outcry against him led to reforms such as the abolition of the death penalty in Illinois.

But Burge hardly developed or operated in a vacuum, as Andrew S. Baer explores to stark effect here. He identifies the darkness of the Burge era as a product of local social forces, arising from a specific milieu beyond the nationwide racialized reactionary fever of the 1960s and 1970s. Similarly, the popular resistance movements that rallied in his wake actually predated Burge’s exposure but cohered with unexpected power due to the galvanizing focus on his crimes and abuses. For more than thirty years, a shifting coalition including torture survivors, their families, civil rights attorneys, and journalists helped to corroborate allegations of violence, free the wrongfully convicted, have Burge fired and incarcerated, and win passage of a municipal reparations package, among other victories. Beyond the Usual Beating reveals that though the Burge scandal underscores the relationship between personal bigotry and structural racism in the criminal justice system, it also shows how ordinary people held perpetrators accountable in the face of intransigent local power.
AUTHOR BIOGRAPHY
Andrew S. Baer is assistant professor of history with a secondary appointment in African American studies at the University of Alabama at Birmingham.

REVIEWS
“Baer has expertly marshalled the complex legal and political record of Chicago police torture and the vital contribution of the social movements that confronted the issue over the decades. Researched exhaustively, documented in painstaking detail, and written in a clear and concise voice, Beyond the Usual Beating is an important addition to the honest retelling of the sordid history of Chicago police torture.”
— G. Flint Taylor, founding partner of the People’s Law Office

“An excellent book, simultaneously objective and interesting. Beyond the Usual Beating should and will likely become the definitive account of Jon Burge.”
— Peter Moskos, John Jay College of Criminal Justice

Chapter One: A Southeast Side Story
Chapter Two: “They Wanted to Be Choirboys”
Chapter Three: “They Believed They Were at War”