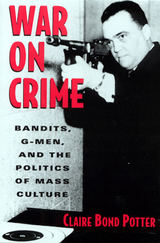 War on Crime revises the history of the New Deal transformation and suggests a new model for political history-one which recognizes that cultural phenomena and the political realm produce, between them, an idea of "the state." The war on crime was fought with guns and pens, movies and legislation, radio and government hearings. All of these methods illuminate this period of state transformation, and perceptions of that emergent state, in the years of the first New Deal. The creation of G-men and gangsters as cultural heroes in this period not only explores the Depression-era obsession with crime and celebrity, but it also lends insight on how citizens understood a nation undergoing large political and social changes.

Anxieties about crime today have become a familiar route for the creation of new government agencies and the extension of state authority. It is important to remember the original "war on crime" in the 1930s-and the opportunities it afforded to New Dealers and established bureaucrats like J. Edgar Hoover-as scholars grapple with the ways states assert influence over populations, local authority, and party politics while they pursue goals such as reducing popular violence and protecting private property.