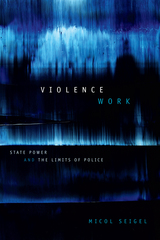 In Violence Work Micol Seigel offers a new theorization of the quintessential incarnation of state power: the police. Foregrounding the interdependence of policing, the state, and global capital, Seigel redefines policing as “violence work,” showing how it is shaped by its role of channeling state violence. She traces this dynamic by examining the formation, demise, and aftermath of the U.S. State Department's Office of Public Safety (OPS), which between 1962 and 1974 specialized in training police forces internationally. Officially a civilian agency, the OPS grew and operated in military and counterinsurgency realms in ways that transgressed the borders that are meant to contain the police within civilian, public, and local spheres. Tracing the career paths of OPS agents after their agency closed, Seigel shows how police practices writ large are rooted in violence—especially against people of color, the poor, and working people—and how understanding police as a civilian, public, and local institution legitimizes state violence while preserving the myth of state benevolence.
AUTHOR BIOGRAPHY
Micol Seigel is Professor of American Studies and History at Indiana University, Bloomington and the author of Uneven Encounters: Making Race and Nation in Brazil and the United States, also published by Duke University Press.
REVIEWS