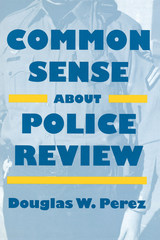 "This book provides knowledge that will be useful to city governments, civil rights organizations, community leaders, clergy, civilian review board advocates, as well as police chiefs and unions. It sheds considerable light on an important issue...[and] makes clear that there are wide ranging variations among departments in policies, accepted practices, management control of the use of force, and accountability of supervisors and officers who use excessive force."

--Patrick V. Murphy, Director, Police Policy Board of the U.S. Conference of Mayors

Common Sense about Police Review is the first comparative study to consider both civilian and internal police review processes. Using survey research of police attitudes and citizen complaints compiled over fifteen years from police departments across the nation, Douglas W. Perez analyzes past and current review systems as a way to develop criteria for comparing three archetypal systems of police review: internal, external (civilian), and hybrid forms of the two.

High media visibility of several events--the 1988 police riot in New York City's Tompkins Square, the 1991 videotaped beating of Rodney King, and the 1992 beating death of Malice Green by Detroit police detectives--has brought police review back into the public arena; not since civil rights demonstrators clashed with police in the 1960s has officer accountability been so hotly debated.

Crucial to any monitoring system are guidelines, which Perez stresses must insist on rigorous investigations of alleged police abuses, outline strict limitations of police action, strive to bridge gaps between police officers and citizens, and exonerate officers who are found to have acted properly and legally. With these standards, the author asserts, a balance between self-sanctioning and enforced regulation can be achieved. Examining fairness, objectivity, and thoroughness in review systems throughout the country, Perez offers a model for the "ideal" police review system. Included are valuable discussions of both the causes of police attitudes and behavior and the misconceptions and expectations that can contribute to a pervasive public image of police malpractice. Perez provides helpful reflections on the role of politicians and administrators in implementing and maintaining police accountability.
REQUEST ACCESSIBLE FILE