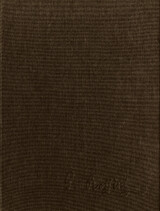 Mosè in Egitto: Azione tragico-sacra in Three Acts by Andrea Leone Tottola
by Gioachino Rossini
edited by Charles S. Brauner
University of Chicago Press, 2005
Cloth: 978-0-226-72866-7
Gioachino Rossini's Mosè in Egitto is an opera that emerged from the eighteenth- and nineteenth-century Italian tradition of oratorios written to be performed during Lent. The three-act opera draws from the Biblical book of Exodus to chronicle the story of Moses liberating the Israelites from Pharaoh's rule and guiding them out of Egypt. The librettist, Andrea Leone Tottola, also borrowed from an eighteenth-century drama to add a love affair between Pharaoh's son and an Israelite girl that motivates Pharaoh's final, fatal refusal in the opera to free the Israelites.

This critical edition presents the version performed in 1820 after Rossini had revised the unsuccessful and now lost third act of 1818. The edition includes an appendix with the original aria for Pharaoh written by Michele Carafa, which was performed throughout the nineteenth century even after Rossini replaced it with one of his own. Also featured are vocal ornamentation used in Paris performances and detailed information on the Paris productions between 1822 and 1840. This comprehensive critical edition provides a reliable source for interpretation and study of a work that Rossini called "sublime."
AUTHOR BIOGRAPHY
Charles S. Brauner is professor of music history and literature and chair of the Department of Music History, Theory, and Composition at Roosevelt University, Chicago.