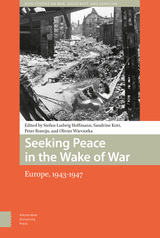 When the Second World War ended, Europe was in ruins. Yet, politically and socially, the years between 1943 and 1947 were a time of dramatic reconfigurations, which proved to be foundational for the making of today's Europe. This volume hones in on the crucial period from the beginning of the end of Nazi rule in Europe to the advent of the Cold War. Through a series of interrelated case studies that span the entire continent, it demonstrates how the everyday experiences of Europeans during these five years shaped the transition of their societies from war to peace. The authors explore these reconfigurations on different scales and levels -the local and regional, the ethnic and national, and the international - with the purpose of enhancing our understanding of how wars end.
AUTHOR BIOGRAPHY
Stefan-Ludwig Hoffman is associate professor at the Department of History at the University of California Berkley. Olivier Wieviorka is professor of history at l'École normale supérieure in Cachan, France. Peter Romijn is head of the Research Department at the NIOD Institute for War, Holocaust and Genocide Studies and professor of history at the University of Amsterdam. Sandrine Kott is professor of contemporary European history at Geneva University.
TABLE OF CONTENTS


The EditorsIntroduction: Seeking Peace in the Wake of War. Europe 1943-1947Section 1: In the Wake of WarMarcin Zaremba The 'War Syndrome': World War II and Polish SocietyStefan Ludwig HoffmannGermans into Allies. Writing a Diary in 1945Olivier Wieviorka, Gabriella Gribaudi, Julie le Gac Two Paths to the Same End? The Challenges of the Liberation in France and ItalyPeter Romijn'Liberators and Patriots': Military Interim Rule and the Politics of Transition in the Netherlands, 1944-1945Section 2: Reordering communitiesJuliette DenisThe Latvian Orphans Released from the Siberian Special Settlements (1946-1947): The Story of an Unusual Rescue in the Post-War USSRMatej SpurnyMigration and Cleansing: Building a New Society in the Czech Borderlands after 1945Audrey Kichelewski To Stay or to Go? Reconfigurations of Jewish Life in Post-War Poland, 1944-1947Masha Cerovic Fighters Like No Others: The Soviet Partisans in the Wake of WarSection 3: Organizing the Peace Sabine Dullin How the Soviet Empire Relied on Diversity: Territorial Expansion and National Borders at the End of World War II in Ruthenia Dirk LuytenSocial Security and the end of the Second World War in France, the Netherlands and Belgium: Social Peace, Organizational Power and the StatePolymeris Voglis The Politics of Reconstruction: Foreign Aid and State Authority in Greece, 1945-1947Sandrine KottOrganizing World Peace: The ILO from the Second World War to the Cold WarPhilip Nord Conclusion