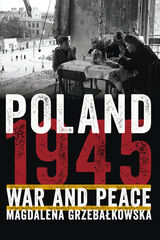 The official end of World War II did not mean the end of the torments inflicted on civilians. This book brings us vivid personal accounts of ordinary people in Poland—Poles, Germans, Jews, Ukrainians, and others—caught up in the most violent war in history and its aftermath. No place experienced more intense suffering for a longer period of time than Poland—the first country to be invaded by both Nazi Germany and Soviet Russia and the last to be “liberated”. This is the story of how people survived the flames of war, and began to clear the rubble and try to rebuild their lives, from January to December 1945.
AUTHOR BIOGRAPHY
Magdalena Grzebałkowska is an award-winning Polish author and journalist.

Małgorzata Markoff is a Polish translator and journalist and co-translator of Paweł Pieniążek’s Greetings from Novorossiya.

John Markoff is a Distinguished University Professor at the University of Pittsburgh and co-translator of Paweł Pieniążek’s Greetings from Novorossiya.
REQUEST ACCESSIBLE FILE