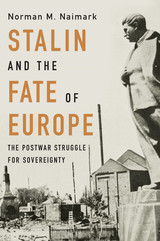 Winner of the Norris and Carol Hundley Award
Winner of the U.S.–Russia Relations Book Prize
A Financial Times Best History Book of the Year

The Cold War division of Europe was not inevitable—the acclaimed author of Stalin’s Genocides shows how postwar Europeans fought to determine their own destinies.

Was the division of Europe after World War II inevitable? In this powerful reassessment of the postwar order in Europe, Norman Naimark suggests that Joseph Stalin was far more open to a settlement on the continent than we have thought. Through revealing case studies from Poland and Yugoslavia to Denmark and Albania, Naimark recasts the early Cold War by focusing on Europeans’ fight to determine their future.

As nations devastated by war began rebuilding, Soviet intentions loomed large. Stalin’s armies controlled most of the eastern half of the continent, and in France and Italy, communist parties were serious political forces. Yet Naimark reveals a surprisingly flexible Stalin, who initially had no intention of dividing Europe. During a window of opportunity from 1945 to 1948, leaders across the political spectrum, including Juho Kusti Paasikivi of Finland, Wladyslaw Gomulka of Poland, and Karl Renner of Austria, pushed back against outside pressures. For some, this meant struggling against Soviet dominance. For others, it meant enlisting the Americans to support their aims.

The first frost of Cold War could be felt in the tense patrolling of zones of occupation in Germany, but not until 1948, with the coup in Czechoslovakia and the Berlin Blockade, did the familiar polarization set in. The split did not become irreversible until the formal division of Germany and establishment of NATO in 1949. In illuminating how European leaders deftly managed national interests in the face of dominating powers, Stalin and the Fate of Europe reveals the real potential of an alternative trajectory for the continent.

REVIEWS
Naimark selects seven case studies to illustrate the complexity of Stalin’s aims in Europe, as he brings his superlative knowledge of the Soviet leader to bear on present-day realities…Naimark has few peers as a scholar of Stalinism, the Soviet Union and 20th-century Europe, and his latest work Stalin and the Fate of Europe is one of his most original and interesting.
-- Financial Times


Details the negotiations, the intrigues, and the showdowns that dominated the febrile politics of the postwar years…Those endeavoring to defend the independence of their territories and governments today would do well to look to the pragmatism, dexterity and resourcefulness of the politicians of the late 1940s. The book is a timely and instructive account not merely of our own history but also of our fractious, unsettling present.
-- Daniel Beer The Guardian


The narrative of the early years of the Cold War has long since grown stale through repeated retellings of US–Soviet confrontations. Naimark, citing sources in six different languages, Europeanizes the story…Stalin and the Fate of Europe exemplifies the best qualities of Cold War history-writing. It is also, I think, a book for our time.
-- Lewis H. Siegelbaum Times Literary Supplement


Norman Naimark adds an abundance of fresh knowledge to a time and place that we think we know, clarifying the contours of Soviet–American conflict by skillfully enriching the history of postwar Europe.
-- Timothy Snyder, author of On Tyranny


Through case studies ranging from Denmark to Italy and Finland to Albania, Naimark shows us just how open and contested European politics was in the immediate postwar years—and how European leaders pushed back for sovereignty even against Stalin. An important contribution to both Cold War and European history.
-- Timothy Garton Ash, author of In Europe’s Name


This original, provocative, and revisionist work on the origins of the Cold War demonstrates the dynamic tension between Stalin’s surprisingly flexible view of Soviet aims and the complex internal politics of several European countries striving to maintain their sovereignty in an international context not yet divided into two camps.
-- Alfred J. Rieber, author of Stalin and the Struggle for Supremacy in Eurasia


Are the United States and China fated to clash? For an answer look to Norman Naimark’s wonderfully surprising Stalin and the Fate of Europe, which reexamines the onset of the original Cold War. Naimark’s splendidly judicious book restores the partial open-endedness of 1945 to 1949, and demonstrates that statesmanship or the lack thereof was decisive in shaping the world that emerged. The achievement of a lifetime.
-- Stephen Kotkin, author of Stalin


Excavates the hidden histories of Stalin’s shifting policies in postwar Europe, undermining conventional understandings of Soviet ambitions and showing Stalin to have been more cautious and pragmatic in his foreign policy than earlier accounts proposed. Naimark is a probing analyst, balanced in his judgments, as well as a masterful storyteller.
-- Ronald Grigor Suny, author of The Soviet Experiment


A masterful account of Stalin’s European policies in the first postwar years; by far the best study of this central issue for understanding the Cold War in Europe.
-- Odd Arne Westad, author of The Cold War


Norman Naimark is one of the foremost authorities on Soviet history and the reign of Joseph Stalin…The book is the culmination of many years of research and is destined to become a point of reference for many years to come.
-- Silvio Pons Inference