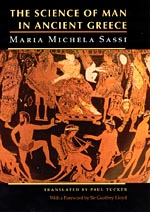 The Science of Man in Ancient Greece
by Maria Michela Sassi
translated by Paul Tucker
University of Chicago Press, 2000
Cloth: 978-0-226-73530-6
Although the ancient Greeks did not have an anthropology as we know it, they did have an acute interest in human nature, especially questions of difference. What makes men different from women, slaves different from free men, barbarians different from Greeks? Are these differences visible in the body? How can they be classified and explained?

Maria Michela Sassi reconstructs Greek attempts to answer such questions from Homer's day to late antiquity, ranging across physiognomy, ethnography, geography, medicine, and astrology. Sassi demonstrates that in the Greek science of man, empirical observations were inextricably bound up with a prejudiced view of the free Greek male as superior to all others. Thus, because women were assumed to have pale skin from staying indoors too much, Greek biology and medicine sought to explain this feature as an indication of the "cold" nature of women, as opposed to the "hot" constitution of men.

For this English translation, Sassi has rewritten the introduction and updated the text and references throughout, and Sir Geoffrey Lloyd has provided a new foreword.
AUTHOR BIOGRAPHY
Maria Michela Sassi teaches at the Scuola Normale Superiore in Pisa, Italy. She is the author of Le teorie della percezione in Democrito and the translator and commentator of Plato's Apologia di Socrate, Critone.
TABLE OF CONTENTS


Foreword
by Sir Geoffrey Lloyd
Preface to the English Edition
Abbreviations
A Note on the Texts
1. The Colors of Humanity
2. The Physiognomical Gaze
3. Reality and Its Classification: Women and Barbarians
4. Prediction and Norm
5. Framed by the Stars
Bibliography
Photo Credits
Index