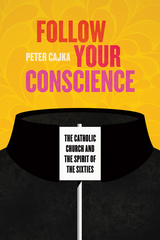 What is your conscience? Is it, as Peter Cajka asks in this provocative book, “A small, still voice? A cricket perched on your shoulder? An angel and devil who compete for your attention?” Going back at least to the thirteenth century, Catholics viewed their personal conscience as a powerful and meaningful guide to align one’s conduct with worldly laws. But, as Cajka shows in Follow Your Conscience, during the national cultural tumult of the 1960s, the divide between the demands of conscience and the demands of the law, society, and even the church itself grew increasingly perilous. As growing numbers of Catholics started to consider formerly stout institutions to be morally hollow—especially in light of the Vietnam War and the church’s refusal to sanction birth control—they increasingly turned to their own consciences as road maps for action and belief. This abandonment of higher authority had radical effects on American society, influencing not only the broader world of Christianity, but also such disparate arenas as government, law, health care, and the very vocabulary of American culture. As this book astutely reveals, today’s debates over political power, religious freedom, gay rights, and more are all deeply infused by the language and concepts outlined by these pioneers of personal conscience.
AUTHOR BIOGRAPHY
Peter Cajka is assistant teaching professor in the Department of American Studies at the University of Notre Dame.
TABLE OF CONTENTS

One / The Conscience Problem and Catholic Doctrine

Three / The State’s Paperwork and the Catholic Peace Fellowship

Five / Psychology and the Self

Seven / Beyond the Catholic Church