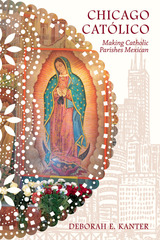 Today, over one hundred Chicago-area Catholic churches offer Spanish language mass to congregants. How did the city's Mexican population, contained in just two parishes prior to 1960, come to reshape dozens of parishes and neighborhoods?

Deborah E. Kanter tells the story of neighborhood change and rebirth in Chicago's Mexican American communities. She unveils a vibrant history of Mexican American and Mexican immigrant relations as remembered by laity and clergy, schoolchildren and their female religious teachers, parish athletes and coaches, European American neighbors, and from the immigrant women who organized as guadalupanas and their husbands who took part in the Holy Name Society. Kanter shows how the newly arrived mixed memories of home into learning the ways of Chicago to create new identities. In an ever evolving city, Mexican immigrants and Mexican Americans’ fierce devotion to their churches transformed neighborhoods such as Pilsen.

The first-ever study of Mexican-descent Catholicism in the city, Chicago Católico illuminates a previously unexplored facet of the urban past and provides present-day lessons for American communities undergoing ethnic integration and succession.

Deborah E. Kanter is John S. Ludington Endowed Professor of History at Albion College. She is the author of Hijos del Pueblo: Gender, Family, and Community in Rural Mexico, 1730–1850.