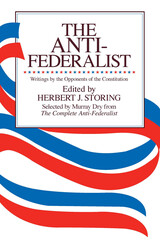 Herbert J. Storing's Complete Anti-Federalist, hailed as "a civic event of enduring importance" (Leonard W. Levy, New York Times Book Review), indisputably established the importance of the Anti-Federalists' writings for our understanding of the Constitution. As Storing wrote in his introduction, "If the foundation of the American polity was laid by the Federalists, the Anti-Federalist reservations echo through American history; and it is in the dialogue, not merely in the Federalist victory, that the country's principles are to be discovered."

This one-volume edition presents the essence of the other side of that crucial dialogue. It can be read as a genuine counterpart to the Federalist Papers; as an original source companion to Storing's brilliant essay What the Anti-Federalists Were For (volume I of The Complete Anti-Federalist, available as a separate paperback); or as a guide to exploring the full range of Anti-Federalist writing. The Anti-Federalist makes a fundamental source of our political heritage accessible to everyone.
AUTHOR BIOGRAPHY
Herbert J. Storing (1928-77), who spent most of his professional life at the University of Chicago, was, at the time of his death, Robert K. Gooch Professor of Government and the director of the Program on the Presidency, White Burkett Miller Center of Public Affairs, University of Virginia. Murray Dry, who prepared this abridgment, is the Charles A. Dana Professor of political science at Middlebury College.
TABLE OF CONTENTS


Preface by Murray Dry
Introduction
Centinel, Letter I
Observations Leading to a Fair Examination of the System of Government Proposed by the Late Convention: Letters from The Federal Farmer, I-VII and XVI-XVII
Essays of Brutus
Pennsylvania
Introduction
The Address and Reasons of Dissent of the Minority of the Convention of Pennsylvania to Their Constituents
Massachusetts
Introduction
Letters of Agrippa, I-XI
Maryland
Introduction
A Farmer, Essay V
Virginia
Introduction
The Impartial Examiner, Essay I
Speeches of Patrick Henry in the Virginia State Ratifying Convention
New York
Introduction
Speeches by Melancton Smith
Bibliography
Index