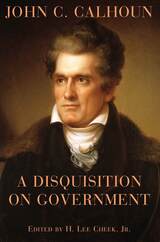 This volume provides the most economical and textually accurate version of Calhoun’s Disquisition available today. As a treatise, the Disquisition is one of the greatest and most enduring works of American politial thought, and a text of seminal importance to all students of American politics, history, philosophy, and law. In the Disquisition, Calhoun believed he had laid a “solid foundation for political science” through revitalizing popular rule. To complete his theoretical and practical mission, Calhoun attempts to explain the best example of the diffusion of authority and cultivation of liberty: the American Constitution. The fundamental law of the American republic provided, after all, the “interior structure” for regulating the shape and scope of government. As a guide for the states and the general government, the Constitution was also part of the “organism” that limited the centralization of authority and allowed for genuine popular rule; and it was Calhoun’s exposition of the connection between the moral demands of a properly constituted concept of popular rule and the need for practical ordering principles that is articulated in this book.

Calhoun presents a theory of politics that is both original and in accord with the mainstream of the American political tradition. More than any other thinker of his period, Calhoun sought to explain the enduring qualities of American political thought in light of the troubled world of the mid-nineteenth century. Unlike other theorists who had preceded and would follow Calhoun, both American and European, he did not seek to invent a new mode of philosophical speculation or a “grand theory” for the human sciences. Instead, he attempted to offer a refinement of classical, medieval, and modern notions regarding the relationship between government and the social order. As an effort in philosophical retrenchment, the Disquisition strengthened many pre-existing conceptions regarding political liberty and popular rule within the American regime, while offering such insight with a view toward the future that awaited America. Calhoun’s attempt in the Disquisition to reconcile the good of popular rule with ethical requirements have singular relevance to the many nations in the twenty-first century now engaged, despite the ethnic animosities threatening their destruction, in building post-ideological, civilized political and social orders, especially the peoples of Central and Eastern Europe, Russia, and Africa.