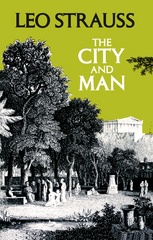 The City and Man
by Leo Strauss
University of Chicago Press, 1978
Paper: 978-0-226-77701-6
The City and Man consists of provocative essays by the late Leo Strauss on Aristotle's Politics, Plato's Republic, and Thucydides' Peloponnesian Wars. Together, the essays constitute a brilliant attempt to use classical political philosophy as a means of liberating modern political philosophy from the stranglehold of ideology. The essays are based on a long and intimate familiarity with the works, but the essay on Aristotle is especially important as one of Strauss's few writings on the philosopher who largely shaped Strauss's conception of antiquity. The essay on Plato is a full-scale discussion of Platonic political philosophy, wide in scope yet compact in execution. When discussing Thucydides, Strauss succeeds not only in presenting the historian as a moral thinker of high rank, but in drawing his thought into the orbit of philosophy, and thus indicating a relation of history and philosophy that does not presuppose the absorption of philosophy by history.
AUTHOR BIOGRAPHY
Leo Strauss (1899-1973) was born and educated in Germany, receiving his doctorate from Hamburg University in 1921. He came to the United States in 1938 and taught political science and philosophy at the New School for Social Research for a decade. He joined the faculty of the University of Chicago as professor of political philosophy in 1949 and was eventually named Robert Maynard Hutchins Distinguished Service Professor. Among his many books are The Political Philosophy of Hobbes; Natural Right and History; and Thoughts on Machiavelli, all of which are available from the University of Chicago Press.
TABLE OF CONTENTS


Preface
Introduction
I. On Aristotle's Politics
II. On Plato's Republic
III. On Thucydides' War of the Peloponnesians and the Athenians
Index