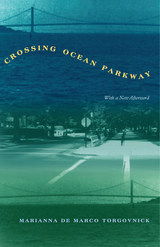 Growing up an Italian-American in the Bensonhurst neighborhood of New York city, Marianna De Marco longed for college, culture, and upward mobility. Her daydreams circled around WASP (White Anglo Saxon Protestant) heroes on television—like Robin Hood and the Cartwright family—but in Brooklyn she never encountered any. So she associated moving up with Ocean Parkway, a street that divides the working-class Italian neighborhood where she was born from the middle-class Jewish neighborhood into which she married. This book is Torgovnick's unflinching account of crossing cultural boundaries in American life, of what it means to be an Italian American woman who became a scholar and literary critic.

Included are autobiographical moments interwoven with engrossing interpretations of American cultural icons from Dr. Dolittle to Lionel Trilling, The Godfather to Camille Paglia. Her experiences allow her to probe the cultural tensions in America caused by competing ideas of individuality and community, upward mobility and ethnic loyalty, acquisitiveness and spirituality.
AUTHOR BIOGRAPHY
Marianna De Marco Torgovnick, professor of English at Duke University, is author of the acclaimed Gone Primitive: Savage Intellects, Modern Lives, also published by the University of Chicago Press.
TABLE OF CONTENTS