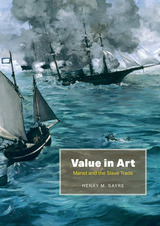 How did art critics come to speak of light and dark as, respectively, “high in value” and “low in value”? In this book, Henry M. Sayre traces the origin of this usage to one of art history’s most famous and racially charged paintings, Édouard Manet’s Olympia.

Art critics once described light and dark in painting in terms of musical metaphor—higher and lower tones, notes, and scales. Sayre shows that it was Émile Zola who introduced the new “law of values” in an 1867 essay on Manet. Unpacking the intricate contexts of Zola’s essay and of several related paintings by Manet, Sayre argues that Zola’s usage of value was intentionally double coded—an economic metaphor for the political economy of slavery. In Manet’s painting, Olympia and her maid represent objects of exchange, a commentary on the French Empire’s complicity in the ongoing slave trade in the Americas.

Expertly researched and argued, this bold study reveals the extraordinary weight of history and politics that Manet’s painting bears. Locating the presence of slavery at modernism’s roots, Value in Art is a surprising and necessary intervention in our understanding of art history.
AUTHOR BIOGRAPHY
Henry M. Sayre is distinguished professor of art history emeritus at Oregon State University–Cascades Campus. He is the creator and executive director of the ten-part television series, A World of Art: Works in Progress, and author of nine books, including The Object of Performance: The American Avant-Garde since 1970.
TABLE OF CONTENTS