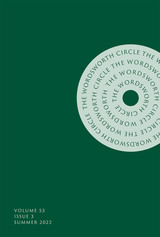 BUY
The Wordsworth Circle, volume 53 number 3 (Summer 2022)
by The University of Chicago Press and The Wordsworth Circle
other editor The University of Chicago
University of Chicago Press Journals, 2022
eISBN: 978-0-226-91648-4
This is volume 53 issue 3 of The Wordsworth Circle. The Wordsworth Circle (TWC) is an international quarterly learned journal founded in 1970 to facilitate communications among colleagues interested in the lives, works, and times of British, American, and European writers from 1770 to 1850, before and after. TWC publishes original essays, conference papers, letters, editions, bibliographies, textual and historical scholarship, biography, interpretive criticism, and critical theory, as well as interdisciplinary, cultural, and comparative studies. It is concerned with anything that influenced, impinges upon, expresses, or contributes to an understanding of the writers, works, and events associated with Romantic studies and its after-lives.