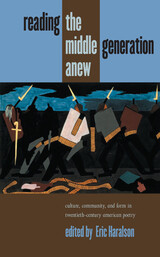 Ten original essays by advanced scholars and well-published poets address the middle generation of American poets, including the familiar---Robert Lowell, Elizabeth Bishop, Randall Jarrell, and John Berryman---and various important contemporaries: Delmore Schwartz, Theodore Roethke, Robert Hayden, and Lorine Niedecker. This was a famously troubled cohort of writers, for reasons both personal and cultural, and collectively their poems give us powerful, moving insights into American social life in the transforming decades of the 1940s through the 1960s.In addition to having worked during the broad middle of the last century, these poets constitute the center of twentieth-century American poetry in the larger sense, refuting invidious connotations of “middle” as coming after the great moderns and being superseded by a proliferating postmodern experimentation. This middle generation mediates the so-called American century and its prodigious body of poetry, even as it complicates historical and aesthetic categorizations.Taking diverse formal and thematic angles on these poets---biographical-historical, deconstructionist, and more formalist accounts---this book re-examines their between-ness and ambivalence: their various positionings and repositionings in aesthetic, political, and personal matters. The essays study the interplay between these writers and such shifting formations as religious discourse, consumerism, militarism and war, the ideology of America as “nature's nation,” and U.S. race relations and ethnic conflicts. Reading the Middle Generation Anew also shows the legacy of the middle generation, the ways in which their lives and writings continue to be a shaping force in American poetry. This fresh and invigorating collection will be of great interest to literary scholars and poets.
AUTHOR BIOGRAPHY
Eric Haralson, associate professor of English at SUNY Stony Brook, is the author of Henry James and Queer Modernity and of numerous essays on the sexual politics of Anglo-American prose and poetry. He has also served as editor of the authoritative Encyclopedia of American Poetry.
REVIEWS

“The essays reveal a complexity and diversity in this poetry that are rather stunning. The volume succeeds in making this neglected era of American poetry seem amazingly interesting, surprisingly rich, and vitally important.”---Steven Gould Axelrod, author of Robert Lowell: Life and Art and Sylvia Plath: The Wound and the Cure of Words

“A wide-ranging and spirited re-examination of the middle generation of American poets---Lowell, Bishop, and Berryman among them---who, in the generation after Frost, Pound, Eliot, Stevens, and Williams, managed to brilliantly, boldly, and decisively turn American poetry on its head in ways no one could have imagined. It is their language we are speaking. This multivoiced collection helps to explain how that came to pass.”---Paul Mariani, author of Deaths & Transfigurations: Poems