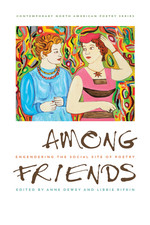 Philosophers and theorists have long recognized both the subversive and the transformative possibilities of friendship, the intimacy of which can transcend the impersonality of such identity categories as race, class, or gender. Unlike familial relations, friendships are chosen, opening a space of relative freedom in which to create and explore new identities. This process has been particularly valuable to poets marginalized by gender or sexuality since the second half of the twentieth century, as friendship provides both a buffer against and a wedge into predominantly male homosocial poetic communities.

Among Friends presents a richly theorized evocation of friendship as a fluid, critical social space, one that offers a vantage point from which to explore the gendering of poetic institutions and practices from the postwar period to the present. With friendship as an optic, the essays in this volume offer important new insights into the gender politics of the poetic avant-garde, since poetry as an institution has continued to be transformed by dramatic changes wrought by second-wave feminism, sexual liberation, and gay rights. These essays reveal the intimate social negotiations that fight, fracture, and queer the conventions of authority and community that have long constrained women poets and the gendering of poetic subjectivities.

From this shared perspective, the essays collected here investigate a historically and aesthetically wide-ranging array of subjects: from Joanne Kyger and Philip Whalen’s trans-Pacific friendship, to Patti Smith’s grounding of her punk persona in the tension between her romantic friendships with male artists and her more professional connections to the poets of the St. Mark’s scene, and from the gender dynamics of the Language School to the Flarf network’s reconception of poetic community in the digital age and the Black Took Collective’s creation of an intimate poetics of performance. Together, these explorations of poetic friendship open up new avenues for interrogating contemporary American poetry.