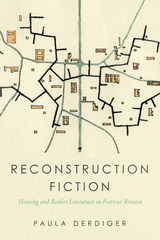 Reconstruction Fiction: Housing and Realist Literature in Postwar Britain by Paula Derdiger assesses the impact of World War II and the welfare state on literary fiction by focusing on one of the defining issues of the postwar period: housing. Through compelling close readings and lively historical and cultural analysis, Derdiger argues that literary realism was a necessary, generative response to the war and welfare state since they impacted the built environment and landscape. Wartime decimation of buildings and streets called for reconstruction, and reconstruction called not just for bricks and mortar, architectural drawings, town plans, preservation schemes, and new policies but also for fiction that invited particular ways of inhabiting an environment that had been irrevocably changed. Derdiger argues that fiction, like actual buildings, creates a sheltered space for the mediation between individual subjects and the social and geographical environments that they encounter. Realist fiction, specifically, insists that such mediation is possible and that it is socially valuable. Covering writers spanning various social positions and aesthetic tendencies—including Elizabeth Bowen, Graham Greene, Patrick Hamilton, Doris Lessing, Colin MacInnes, and Elizabeth Taylor—Derdiger shows how these authors responded to the war with realistic technique, investing in external conditions just as much as or more than their characters’ interior lives. In doing so, their reconstruction fiction helped to shape postwar life.
AUTHOR BIOGRAPHY
Paula Derdiger is Assistant Professor of English at the University of Minnesota Duluth.
REVIEWS
“Paula Derdiger’s book superbly meets the requirements of the second decade of the twenty-first century for new studies addressing the need to rebuild the social and material spheres that have been depredated by decades of the promotion of a neoliberal individualism.” —Nick Hubble, author of Proletarian Answer to the Modernist Question


“An important subject is central to current scholarship British mid-century literature but it does so in an original way and—vitally—it marshals a range of writers with real élan.”—Leo Mellor, author of Reading the Ruins: Bombsites, Modernism and British Culture


“Paula Derdiger’s Reconstruction Fiction is a welcome and necessary book, one that adds significantly to a richer and more nuanced understanding of twentieth-century British literature and culture.”—Todd Kuchta, author of Semi-Detached Empire: Suburbia and the Colonization of Britain, 1880 to the Present

Introduction    “We Shall Look Out Through Glass”

Chapter 2        Billets and Boardinghouses: Shared Space and the Reconstruction Novel

Conclusion      Reconstruction as Departure and Return