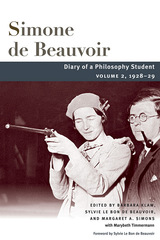 "That’s when everything started," Simone de Beauvoir wrote in an entry dated July 8, 1929. On that day, her relationship with Jean-Paul Sartre began. This second volume of Beauvoir's Diary of a Philosophy Student takes readers into smoky dorm rooms and inter-war Paris as it continues the feminist philosopher's coming-of-age story. Here are Beauvoir's famous sparring sessions with Sartre in the Luxembourg Gardens--teasing him while stoking her burgeoning intellectual strength. Here also are her friendships and academic challenges, the discovery of important future influences like Barrès and Hegel, and her early forays into formulating the problem of the Other. In addition to the diary, the editors provide invaluable supplementary material. A trove of footnotes and endnotes elaborates on virtually every reference made by Beauvoir, offering an atlas of her knowledge and education while at the same time allowing readers to share her intellectual and cultural milieu. Translator and scholar Barbara Klaw also contributes an introduction on reading Beauvoir's diaries as a philosophy of self-help.
AUTHOR BIOGRAPHY
Simone de Beauvoir (1908–86) was a French existentialist philosopher. Her works include Ethics of Ambiguity (1947) and The Second Sex (1949). Barbara Klaw is a professor emerita of French at Northern Kentucky University. She is the translator of Diary of a Philosophy Student: Volume 1, 1926–27, and author of Le Paris de Beauvoir. Sylvie Le Bon de Beauvoir, adopted daughter and literary executor of Simone de Beauvoir, is the editor of Lettres à Sartre and other works by Beauvoir. Margaret A. Simons is Distinguished Research Professor Emerita at Southern Illinois University Edwardsville and the author of Beauvoir and The Second Sex: Feminism, Race, and the Origins of Existentialism. Klaw, Le Bon de Beauvoir, and Simons coedited Diary of a Philosophy Student: Volume 1, 1926–27
TABLE OF CONTENTS