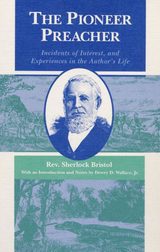 Originally published in 1887,
The Pioneer Preacher is a lively account of a Congregationalist
minister's attempts to lead a sin-free existence on the American frontier.
Sherlock Bristol (1815-1906)
was a California gold miner, wagon train captain, Wisconsin farmer, Idaho
rancher, Indian fighter, abolitionist, and Oberlin-trained clergyman.
While serving a series of churches in the East, he periodically cured
himself of "nervous disorders" by journeying out West. He only
broke the Sabbath once---during an Indian attack!
Reflecting in his memoirs
the exploits of Daniel Boone and Davy Crockett, Bristol delights in recounting
his adventures, ecclesiastical or otherwise. He vividly recalls his redemption
in the wilderness where he enjoyed having "little opportunity for
reading books or mental exercise, and an abundance of calls for muscular
employment." Greatly influenced by the evangelist Charles G. Finney
at Oberlin, Bristol tried to teach miners and frontiersmen the principles
of revivalism, postmillennialism, and perfectionism. In The Pioneer
Preacher he shares his own disputatious views on abolition, American
Indians, temperance, and other issues of his day.