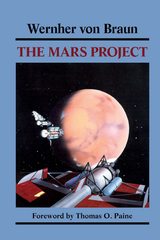 This classic on space travel was first published in 1953, when interplanetary space flight was considered science fiction by most of those who considered it at all. Here the German-born scientist Wernher von Braun detailed what he believed were the problems and possibilities inherent in a projected expedition to Mars.

Today von Braun is recognized as the person most responsible for laying the groundwork for public acceptance of America's space program. When President Bush directed NASA in 1989 to prepare plans for an orbiting space station, lunar research bases, and human exploration of Mars, he was largely echoing what von Braun proposed in The Mars Project.
AUTHOR BIOGRAPHY
The late Wernher Von Braun came to the United States in 1945, after having been chiefly responsible for the development of Germany's V-2 rockets. He was director of the George C. Marshall Space Flight Center, National Aeronautics and Space Administration (NASA), Huntsville, Alabama. He received eight honorary degrees for his contributions to America's missile and space programs. Thomas O. Paine is a former NASA administrator.
REVIEWS
"The Mars Project is timely. . . . von Braun's views, seen today against the debate over the role of the shuttle, the development of Space Station Freedom, and the proposal to land Earthlings on Mars early in the next century, raise questions that we still seek to answer."--Jannelle Warren-Findley, coeditor of A Documentary History of the Space Age