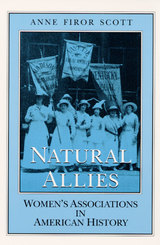 America's female benevolent societies took root in the 1790s. Initially founded on notions of Christian duty and hope of heavenly reward, these groups produced volunteers dedicated to providing aid to unfortunates in general and women and children in particular. Anne Frior Scott explores the history of these aid societies and how they allowed women to influence America's social agenda and make inroads into politics long before they could vote. Scott reveals how women from all corners of society took part; examines their changing role in the midst of tumultuous times and during the rise of the welfare state; assesses the overlooked accomplishment of black women's organizations from the early days of the republic; and looks at the kinds of enduring community institutions women's organizations founded and maintained.
AUTHOR BIOGRAPHY
Anne Firor Scott (d. 2019) was a pioneering figure in the field of women's history and a longtime professor at Duke University. Her books include The Southern Lady: From Pedestal to Politics, 1830–1930 and Making the Invisible Woman Visible.
REVIEWS
"Both an engaging survey of existing scholarship and a plea for additional research. . . . With wry humor and impassioned scholarship, Anne Frior Scott teaches us that the more we are able to learn about women . . . 'the more we will understand about the society that has shaped us all.'"--New York Times Book Review


"Reminds us that women found inventive and effective ways to enter the political arena even before they voted or held office. And it testifies to what can happen when women's concerns, which traditionally emphasize the welfare of women and children, take priority on the national agenda."--Sarah Stage, The Nation