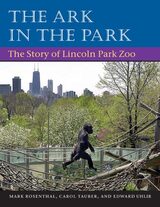 Drawing visitors to the heart of Chicago's north side for 135 years, Lincoln Park Zoo is one of the oldest and most popular zoos in America. This thorough and fascinating history of the zoo combines archival materials, photographs, and oral histories to chronicle the zoo's development and chart the unique role it has played not just in the growth of Chicago but in the establishment of zoos in cities across America.

Lincoln Park Zoo was established in 1868 when New York's Central Park Commissioners sent the Lincoln Park Commissioners the gift of two pairs of swans. The swans were such a popular attraction that the park commissioners began acquiring other animals and building quarters for them, adding a bear cage, a bison enclosure, a sea lion pool, an eagle exhibit, and an animal house, all before 1900.

Although the zoo was initially conceived as a primarily recreational attraction, its mission has evolved over time, with conservation, science, and education now forming central elements. Starting in 1884, when the zoo saw what was reportedly the first-ever birth of a North American bison in captivity, Lincoln Park Zoo has been part of the effort to study and protect endangered species from all over the world.

This comprehensive history of Lincoln Park Zoo also tells the wider story of the growth of the American zoo movement and the changes that have occurred in the past century, as zoos evolved from a leisure pursuit into a multimillion-dollar industry and an invaluable participant in global conservation efforts.