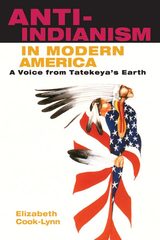 We all know what happened at Wounded Knee . . . don't we?

In this powerful and essential work, Elizabeth Cook-Lynn confronts the politics and policies of genocide that continue to destroy the land, livelihood, and culture of Native Americans. Anti-Indianism in Modern America tells the other side of stories of historical massacres and modern-day hate crimes, events that are dismissed or glossed over by historians, journalists, and courts alike. Cook-Lynn exposes the colonialism that works both overtly and covertly to silence and diminish Native Americans, supported by a rhetoric of reconciliation, assimilation, and multiculturalism. Comparing anti-Indianism to anti-Semitism, she sets the American history of broken treaties, stolen lands, mass murder, cultural dispossession, and Indian hating in an international context of ethnic cleansing, "ecocide" (environmental destruction), and colonial oppression.

Cook-Lynn also discusses the role Native American studies should take in reasserting tribal literatures, traditions, and politics and shows how the discipline has been sidelined by anthropology, sociology, postcolonial studies, and ethnic studies. Asserting the importance of a "native conscience"--a knowledge of the mythologies, mores, and experiences of tribal society--among American Indian writers, she calls for the expression in American Indian art and literature of a tribal consciousness that acts to assure a tribal-nation people of its future.

Passionate, eloquent, and uncompromising, Anti-Indianism in Modern America concludes that there are no real solutions for Indians as long as they remain colonized peoples. Native Americans must be able to tell their own stories and, most important, regain their land, the source of religion, morality, rights, and nationhood. As long as public silence accompanies the outlaw maneuvers that undermine tribal autonomy, the racist strategies that affect all Americans will continue.

It is difficult, Cook-Lynn concedes, to work toward the development of legal mechanisms against hate crimes, in Indian Country and elsewhere in the world. But it is not too late.

AUTHOR BIOGRAPHY
Elizabeth Cook-Lynn, a member of the Crow Creek Sioux Tribe, is a writer, poet, and professor emerita of Native American studies at Eastern Washington University. She lives in Rapid City, South Dakota. Her books include The Politics of Hallowed Ground (coauthored with Mario Gonzalez), and Aurelia, a Trilogy.
REVIEWS

“With this set of incisive essays, Elizabeth Cook-Lynn confirms her status as the most insightful Indian essayist of our time. Displaying an incredible breadth of knowledge in a variety of fields, she examines some of the most controversial issues in American Indian studies.”--Vine Deloria Jr., Pacific Historical Quarterly