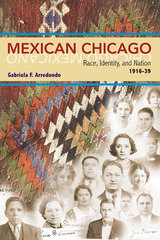 Mexican Chicago builds on previous studies of Mexicans in the United States while challenging static definitions of “American” and underlying assumptions of assimilation. Gabriela F. Arredondo contends that because of the revolutionary context from which they came, Mexicans in Chicago between 1916 and 1939 were not just another ethnic group working to be assimilated into a city that has a long history of incorporating newcomers. Suggesting a new understanding of identity formation, she argues that Mexicans wielded tools of identification forged in revolutionary Mexico to collectively battle the prejudices of ethnic groups that included Poles, Italians, and the Irish, as well as African Americans. By turning inward, however, Mexicans also highlighted tremendous differences among themselves, such as gender and class. In discussing this distinctive process of becoming “Mexican” in Chicago during the early twentieth century, Arredondo not only explores how that identity was constructed but also provides telling insight into the repercussions of that identity formation process.

Gabriela Arredondo is an associate professor of Latin American and Latina/o Studies, University of California, Santa Cruz, and coeditor of Chicana Feminisms: Disruptions in Dialogue.