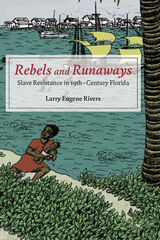 This gripping study examines slave resistance and protest in antebellum Florida and its local and national impact from 1821 to 1865. Using a variety of sources such as slaveholders' wills and probate records, ledgers, account books, court records, oral histories, and numerous newspaper accounts, Larry Eugene Rivers discusses the historical significance of Florida as a runaway slave haven dating back to the seventeenth century and explains Florida's unique history of slave resistance and protest. In moving detail, Rivers illustrates what life was like for enslaved blacks whose families were pulled asunder as they relocated from the Upper South to the Lower South to an untamed place such as Florida, and how they fought back any way they could to control small parts of their own lives.

Against a smoldering backdrop of violence, this study analyzes the various degrees of slave resistance--from the perspectives of both slave and master--and how they differed in various regions of antebellum Florida. In particular, Rivers demonstrates how the Atlantic world view of some enslaved blacks successfully aided their escape to freedom, a path that did not always lead North but sometimes farther South to the Bahama Islands and Caribbean. Identifying more commonly known slave rebellions such as the Stono, Louisiana, Denmark (Telemaque) Vesey, Gabriel, and the Nat Turner insurrections, Rivers argues persuasively that the size, scope, and intensity of black resistance in the Second Seminole War makes it the largest sustained slave insurrection ever to occur in American history.

Meticulously researched, Rebels and Runaways offers a detailed account of resistance, protest, and violence as enslaved blacks fought for freedom.