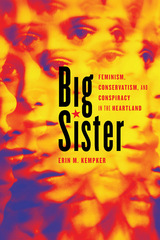 The mid-Seventies represented a watershed era for feminism. A historic National Women's Conference convened in Houston in 1977. The Equal Rights Amendment inched toward passage. Conservative women in the Midwest, however, saw an event like the International Year of the Woman not as a celebration, but as part of a conspiracy that would lead to radicalism and one-world government. Erin M. Kempker delves into how conspiracy theories affected--and undermined--second wave feminism in the Midwest. Focusing on Indiana, Kempker views this phenomenon within the larger history of right-wing fears of subversion during the Cold War. Feminists and conservative women each believed they spoke in women's best interests. Though baffled by the conservative dread of "collectivism," feminists compromised by trimming radicals from their ranks. Conservative women, meanwhile, proved adept at applying old fears to new targets. Kemper's analysis places the women's opposing viewpoints side by side to unlock the differences that separated the groups, explain one to the other, and reveal feminism's fate in the Midwest.
AUTHOR BIOGRAPHY
Erin M. Kempker is an associate professor of history at the Mississippi University for Women.
TABLE OF CONTENTS
Cover
Title Page
Copyright
Contents
Acknowledgments
Introduction
CHAPTER 1: Women’s Experience in Cold War America
CHAPTER 2: Anticommunists and the World Government Conspiracy
CHAPTER 3: The Battle over the ERA
CHAPTER 4: Low-Key Feminism as a Strategy
CHAPTER 5: The International Women’s Year as a Fulcrum
Epilogue
Notes
Index