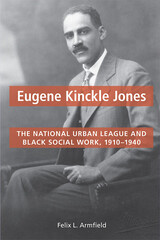 A leading African American intellectual, Eugene Kinckle Jones (1885–1954) was instrumental in professionalizing black social work in America. Jones used his position was executive secretary of the National Urban League to work with social reformers advocating on behalf of African Americans and against racial discrimination. He also led the Urban League's efforts at campaigning for equal hiring practices and the inclusion of black workers in labor unions, and promoted the importance of vocational training and social work.

Drawing on interviews with Jones's colleagues and associates, as well as recently opened family and Urban League archives, Felix L. Armfield blends biography with an in-depth discussion of the roles of black institutions and organizations. The result is a work that offers new details on the growth of African American communities, the evolution of African American life, and the role of black social workers in the years before the civil rights era.
AUTHOR BIOGRAPHY
Felix L. Armfield is a professor of history at Buffalo State College and the author of Black Life in West Central Illinois.
REVIEWS

"This important book rescues Eugene Kinckle Jones from relative historical obscurity and anchors his rightful place as a major black leader during the first half of the twentieth century."--Robert L. Harris Jr., coeditor of The Columbia Guide to African American History Since 1939

"Armfield weaves a narrative that teases out two major strands: the first reats the life and times of Eugene Kinckle Jones, an African American progressive reformer and social worker (among many things); the second, the history of American social work and Jones's quest for the inclusion of African Americans in that profession."--Indiana Magazine of History

"A useful book that gives necessary attention to an undervalued figure. A worthwhile study of Jones and a valuable contribution to the history of the social work movement."--Social Service Review