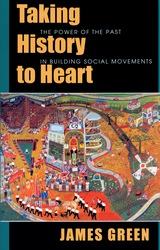 Taking History to Heart: The Power of the Past in Building Social Movements
by James Green
University of Massachusetts Press, 2000
Paper: 978-1-55849-242-4
Deftly blending autobiography and history, James Green here reflects on thirty years as an activist, educator, and historian. He recounts how he became deeply immersed in political protest and in recovering and preserving the history of progressive social movements, and how the two are linked. His book, written in an engaging and accessible style, tells powerful stories of people in struggle, framed by the personal account of his own development. As a historian, Green gives voice to generations of Americans who banded together to fight for social justice. His subjects range from the martyrs of the Haymarket tragedy to the Bread and Roses strikers of 1912, from depression-era struggles for democracy to the civil rights crusaders, from recent Rainbow Coalition campaigns to the latest union organizing drives. As an activist, Green describes how his participation in the civil rights and labor movements of our own time has transformed his life, first as a student and radical scholar in the 1960s, then as a public historian and teacher of working-class students. He also describes his efforts to break free from academic confinement and "tell movement stories in public," in an attempt to offer hope and counsel to those still fighting for equality and fairness. He concludes with a revealing look at how awareness of past social activism has contributed to the revival of the labor movement during the last ten years, an effort in which Green has been vigorously engaged.
AUTHOR BIOGRAPHY
James Green is professor of history and labor studies at the University of Massachusetts Boston and coauthor of Commonwealth of Toil: Chapters in the History of Massachusetts Workers and Their Unions (University of Massachusetts Press, 1996).