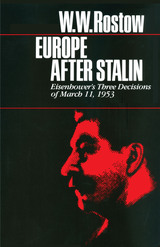 Europe after Stalin: Eisenhower's Three Decisions of March 11, 1953
by W. W. Rostow
University of Texas Press, 1982
Paper: 978-0-292-72036-7
Stalin's death on March 6, 1953, reopened the debate within the Eisenhower administration over whether or not the United States should propose and actively promote the reunification of Germany at a summit conference. Written by an insider, this is the only published firsthand account of this foreign policy decision—a decision that illuminated the dilemmas of the Cold War at an important moment. W. W. Rostow examines the origins of Eisenhower's "peace speech" of April 16, 1953, and of the National Security Council's debate on the German question between John Foster Dulles and presidential adviser C. D. Jackson. Jackson proposed immediate high-level diplomatic contact with the Soviet Union and the countries of Western Europe to discuss German reunification, as well as proposals for the general control of armaments and special security arrangements for Europe. Dulles, however, argued for a more reserved posture, which ruled out summitry and immediate negotiation with the Soviets. Dulles prevailed, but Eisenhower made his famous "peace speech." In his concluding chapter, Rostow explores the question of whether or not anything was lost by this outcome. Was an opportunity for a united Germany forfeited when Eisenhower rejected Churchill's suggestion for a prompt summit meeting and backed Dulles against Jackson in the National Security Council meeting of March 11? This is the third in a series of volumes by the author that probe the relationship between ideas and action in the making of major policy decisions. In this series, Rostow examines historic decision making from an insider's point of view while exploiting fully the rich documentary evidence.
AUTHOR BIOGRAPHY
W. W. Rostow (1916–2003) was Professor of Economics and History at the University of Texas at Austin.