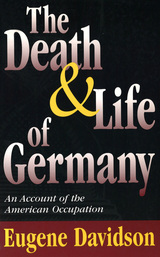 Offering much more than a detached historical account of the "German miracle"—a ruined, war-torn nation evolving within a decade into the most flourishing country in Europe—Eugene Davidson delves into this intriguing story as a "participant observer." Drawing on countless interviews with Germans and Americans of various backgrounds and perspectives, from High Commissioner's office personnel to occupation troop GIs, storekeepers to housewives, Davidson insightfully conveys the atmosphere of postwar Germany and the role of the American occupation in achieving the nation's economic miracle.

The Death and Life of Germany examines the transformation of Germany, focusing on such key episodes as the unprecedented war-crimes tribunal at Nuremberg, the almost unceasing attempts of the Western Allies to cooperate with the Russians, the startling effects of the currency reform and Marshall Plan aid, the break between East and West Germany that culminated in the Berlin airlift, the heroic East German uprising of June 17, 1953, and the eventual formation of the Federal Republic of Germany and the German Democratic Republic.

Davidson traces the progress of thought among Germans and Americans alike as their conceptions of postwar Germany gradually evolved and the leaders of a new, democratic West Germany emerged from the ashes of defeat.

The strength of Davidson's research and analysis and the continuing relevance of this important volume make The Death and Life of Germany an invaluable addition to the collections of scholars and general readers interested in the evolution of postwar Germany.

A deeply interesting narrative that is marked by wide research and objective presentation."—The National Book Foundation