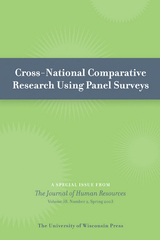 This special issue revises and expands on presentations given at a conference on comparative research using international panel surveys held in Ann Arbor, Michigan. Five of the articles explicitly or implicitly examine international differences in savings behavior and wealth accumulation. The final two articles use international comparisons to assess the status of young children.

Introduction to the JHR’s Special Issue on Cross-National Comparative Research Using Panel Surveys, by James P. Smith, Frank Stafford, and James R. Walker
Understanding Differences in Household Financial Wealth between the United States and Great Britain, by James Banks, Richard Blundell, and James P. Smith
Economic Shocks, Wealth, and Welfare, by Elizabeth Frankenberg, James P. Smith, and Duncan Thomas
Wealth Dynamics in the 1980s and 1990s: Sweden and the United States, by N. Anders Klevmarken, Joseph P. Lupton, and Frank P. Stafford
What Do We Learn from Recall Consumption Data?, by Erich Battistin, Raffaele Miniaci, and Guglielmo Weber
Health, Wealth, and the Role of Institutions, by Michael Hurd and Arie Kapteyn
Does Money Matter?: A Comparison of the Effect of Income on Child Development in the United States and Great Britain, by Alison Aughinbaugh and Maury Gittleman
Why Are Child Poverty Rates Higher in Britain than in Germany?: A Longitudinal Perspective, by Stephen P. Jenkins and Christian Schluter