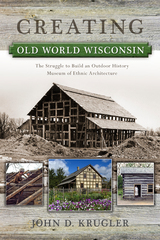 With its charming heirloom gardens, historic livestock breeds, and faithfully recreated farmsteads and villages that span nearly 600 acres, Old World Wisconsin is the largest outdoor museum of rural life in the United States. But this seemingly time-frozen landscape of rustic outbuildings and rolling wooded hills did not effortlessly spring into existence, as John D. Krugler shows in Creating Old World Wisconsin.
Visionaries, researchers, curators, and volunteers launched a massive preservation initiative to salvage fast-disappearing immigrant and migrant architecture. Dozens of historic buildings in the 1970s were transported from locations throughout the state to the Kettle Moraine State Forest. These buildings created a backdrop against which twenty-first-century interpreters demonstrate nineteenth- and early twentieth-century agricultural techniques and artisanal craftsmanship. The site, created and maintained by the Wisconsin Historical Society, offers visitors a unique opportunity to learn about the state’s rich and ethnically diverse past through depictions of the everyday lives of its Norwegian, Danish, Finnish, German, Polish, African American, and Yankee inhabitants.
Creating Old World Wisconsin chronicles the fascinating and complex origins of this outdoor museum, highlighting the struggles that faced its creators as they worked to achieve their vision. Even as Milwaukee architect and preservationist Richard W. E. Perrin, the Society's staff, and enthusiastic volunteers opened the museum in time for the national bicentennial in 1976, the site was plagued by limited funds, bureaucratic tangles, and problems associated with gaining public support. By documenting the engaging story of the challenges, roadblocks, false starts, and achievements of the site's founders, Krugler brings to life the history of the dedicated corps who collected and preserved Wisconsin's diverse social history and heritage.
AUTHOR BIOGRAPHY
John D. Krugler is professor of early American history and public history at Marquette University. He is the author of English and Catholic: The Lords Baltimore in the Seventeenth Century. He lives in Menomonee Falls, Wisconsin.
REVIEWS
"In this gracefully written and insightful book, John D. Krugler pulls back the curtain to reveal the history behind one of the nation's great outdoor museums. Creating Old World Wisconsin will enlighten and entertain museum visitors and will be essential reading for public history professionals."—Michael E. Stevens, Wisconsin Historical Society


"A meticulously researched account of the development of a premier historical attraction of significance not only to Wisconsin but to the entire nation. Krugler takes the reader from what was once just a vision to preserve vestiges of our state's unique architectural legacy, through many perplexing challenges that complicated the museum's construction, to what has become one of America's largest and finest outdoor museums of rural American life."—William H. Tishler, author of Door County's Emerald Treasure: A History of Peninsula State Park


“Highly recommended reading for anyone who has ever visited one of Wisconsin’s premier attractions, Creating Old World Wisconsin is a ‘must’ for all Wisconsin school and college library collections.”—The Midwest Book Review