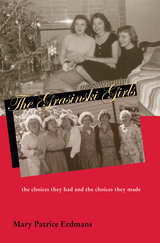 The Grasinski Girls were working-class Americans of Polish descent, born in the 1920s and 1930s, who created lives typical of women in their day. They went to high school, married, and had children. For the most part, they stayed home to raise their children. And they were happy doing that. They took care of their appearance and their husbands, who took care of them. Like most women of their generation, they did not join the women’s movement, and today they either reject or shy away from feminism.

Basing her account on interviews with her mother and aunts, Mary Erdmans explores the private lives of these white, Christian women in the post-World War II generation. She compares them, at times, to her own postfeminist generation. Situating these women within the religious routines that shaped their lives, Professor Erdmans explores how gender, class, ethnicity, and religion shaped the choices the Grasinski sisters were given as well as the choices they made. These women are both acted upon and actors; they are privileged and disadvantaged; they resist and surrender; they petition the Lord and accept His will.

The Grasinski Girls examines the complexity of ordinary lives, exposing privileges taken for granted as well as nuances of oppression often overlooked. Erdmans brings rigorous scholarship and familial insight to bear on the realities of twentieth-century working-class white women in America.

Mary Patrice Erdmans is an associate professor of sociology at Central Connecticut State University. She is the author of Opposite Poles: Immigrants and Ethnics in Polish Chicago, 1976-1990, winner of the Oskar Halecki Award from the Polish American Historical Association