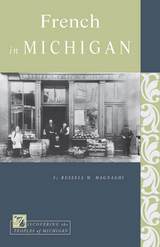 Compared to other nationalities, few French have immigrated to the United States, and the state of Michigan is no exception in that regard. Although the French came in small numbers, those who did settle in or pass through Michigan played important roles as either permanent residents or visitors.
The colonial French served as explorers, soldiers, missionaries, fur traders, and colonists. Later, French priests and nuns were influential in promoting Catholicism in the state and in developing schools and hospitals. Father Gabriel Richard fled the violence of the French Revolution and became a prominent and influential citizen of the state as a U.S. Congressman and one of the founders of the University of Michigan. French observers of Michigan life included Alexis de Tocqueville. French entrepreneurs opened copper mines and a variety of service-oriented businesses. Louis Fasquelle became the first foreign-language instructor at the University of Michigan, and François A. Artault introduced photography to the Upper Peninsula. As pioneers of the early automobile, the French made a major contribution to the language used in auto manufacturing.
AUTHOR BIOGRAPHY
Russell M. Magnaghi taught at Northern Michigan University, where he served as head of the history department and director of the Center for Upper Peninsula Studies.
TABLE OF CONTENTS
Contents
Preface
Introduction
Colonial Era in Michigan
Nineteenth-Century French Immigration
French Observers of and Visitors to Michigan
Twentieth Century and Beyond
Appendix 1. Cultural Resources
Appendix 2. French Recipes
Appendix 3. Foodstuffs at Detroit, 1701–1751
Appendix 4. French Geographical Legacy in Michigan
Notes
For Further Reference
Index
REQUEST ACCESSIBLE FILE